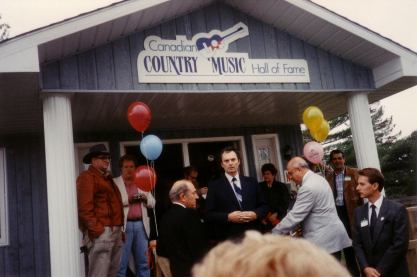 The First Home of the Canadian Country Music Hall of Fame

27 years ago today, the first home of the Canadian Country Music Hall of Fame opened in Kitchener, Ont.! Singer, songwriter and producer Gary Buck had owned the copyright to the name, resulting in the Canadian Country Music Association (CCMA) recognizing the legends with their own Canadian Country Music Hall of Honour awards. At first, Gary’s plans in the late 1980’s were to open the Hall in an old converted school in Hamilton, Ont. (he once showed me the architecture plans), but renovation costs soon made that idea unlikely. His next plan was to have a pre-built structure assembled on the grounds of Sportsworld (an entertainment complex) in Kitchener. On Nov. 2, 1989, it was opened with Buck doing the official opening and then-Mayor Dom Cardillo and the legendary Lucille Starr among the attendees. I was on the advisory board and had several great moments at the Hall, including serving as tour guide for Johnny Cash and June Carter. Before a concert appearance across the highway at Lulu’s Roadhouse, Gary had invited them to the exhibit and asked me to show them around. Johnny and June donated several of their own items to the Hall. Since then, the Hall has moved to several different locations with the Hall of Fame and Hall of Honour merging in 1999. Gary passed away in 2003 as the lengthy merging process continued until 2009. By 2011, the CCMA owned the Hall of Fame trademark with the Hall located in Merritt, B.C. and the National Music Centre in Calgary currently exhibiting portions of the Hall of Fame collection on a rotating basis.

The community of Merritt has a long history of Music based on the Country Music History of Merritt Mountain Music Festival and a collection of artist handprints were in a trail that the community created to bring the success of the music festival to the downtown core. This inititiave also saw the community inviting the well know mural art trades program of Michelle Loughery Mural to Merritt, as a way to expand the handprint program with Murals.

The plaques got to Merritt based on the gift of the plaques to the Michelle Loughery youth project, as a way to help continue the youth project that was called the Merritt Walk of Stars Mural Project, a program of the work of the non profit group called the Merritt Walk of Stars.  This extremely successful group of music supporters completely rebuilt the branding of their community to be the Country Music Capitol of Canada, a community art & youth training model that was also a Loughery initiative in a duplicate program in the ROUTE 66 Mural city in Cuba, Missouri

The story goes like this….Amber Papou and Michelle Loughery were socializing at a gala event at the CCMA Award show weekend in Winnipeg . In social conversations at the First Nations hosted dinner event two gentlemen started to ask about why we were there. After talking about the murals, and the handprints, and the amazing first Nations skills youth skills mural community revitalization project, one of the gentlemen said , well we have the Hall of Fame plaques and we don’t know what to do with them as they are at Stampede grounds, but they need a home.. Would your project like them to help build up the community and the project so more youth and the community can be helped. We(Amber & Michelle) of course jumped on the opportunity and ran to grab Ron Sanders the lead and passion to the Country Music Capitol of Canada to tell him about the offer. The naming of the County Music Capitol of Canada was also a suggestion from the Youth Project duo to the city of Merritt.. The determination to copy the heritage revise that Loughery’s project had helped the City of Vernon and Cuba, Missouri.  Amber then talked to Claude, owner of the Mountain Music Festival, who assisted her in the proposal to get the plaques from the Stampede grounds to Merritt. The crazy drive and pick up of the plaques took place with Michelle’s husband Rick, his RCMP brother and Rob Creelman..a crazy old horse trailer and a road trip…Life is always a roadtrip. And this one a great one for Merritt.

The creative rural philosophy of art and employment skills was the steam socio-economic program that brought much of the economic funds to the building of the Hall of Fame and Walk of Stars Programs. The community has a group of very dedicated champions that have given countless dollars and time to the on going legacy of the CCMA Hall of Fame in Merritt. The branding of this community and the youth project that has been duplicated Globally will leave a legacy that is a large as the body of work of the musicians that have played nationally and in so many kitchens, back yards and music fests.  People are brought together by the power of the creators and the songs we sing…..

more on this story of the plaques and the music murals in Merritt to come.

Previous Post
ROUTE BLUE- filming a regional trailer for the highway connected community project..connecting the stories and people in the murals that are connected by history and sung about in song. #CCMA HALL OF FAME #COUNTRYMUSIC WALK OF STARS MURALS
Next Post
#CCMAHallofFame #route97 #merritt#routeblueroadtrip @michellelougherymurals#bluebirdcountry#walkofstars
Loading Comments...
%d bloggers like this: